Being concise is one of the standards of superior writing. Unfortunately, when you’re writing the first draft of your novel in a month, your mind might insert a lot of “filler” words. I’ve had this problem for years, but recently have come across a simple solution to help my manuscripts “cut the fluff” during the editing phase.

For some background, one of my beta readers for The Third Degree noticed the word “that” popping up more often than it should. My solution at the time was to replace most of the “that” with “which.” I had always heard the advice “don’t use that,” so instead of eliminating the word from my writing, I merely shifted it to a different word. Now that I’ve received notes back on The Constellation Tournament it appears I’ve been found out. A completely different beta reader was distracted by the enormous amount of times I used “which.”

Recognizing the problem, I set about trying to find a solution. Fortunately, this was a pretty easy fix. I’m sure there are other repeated words in my manuscripts that I need to sic the thesaurus on, but these two words usually don’t add much, if anything at all, to the manuscript. In fact, often the context of the sentence remains unchanged when these words are eliminated. Consequently, this was how I created a new editing game: Which Hunter

Here’s how to play:
1. Open up your manuscript in the editing software of your choice (mine is Microsoft Word).
2. Do a “find all” search for the words that and which.
3. Highlight these words so you can see where they pop up in your manuscript.
4. Go through and methodically remove or modify the surrounding words to eliminate the use of these two fillers.

It’s that simple! Here’s an example I’ve run on The Constellation Tournament: 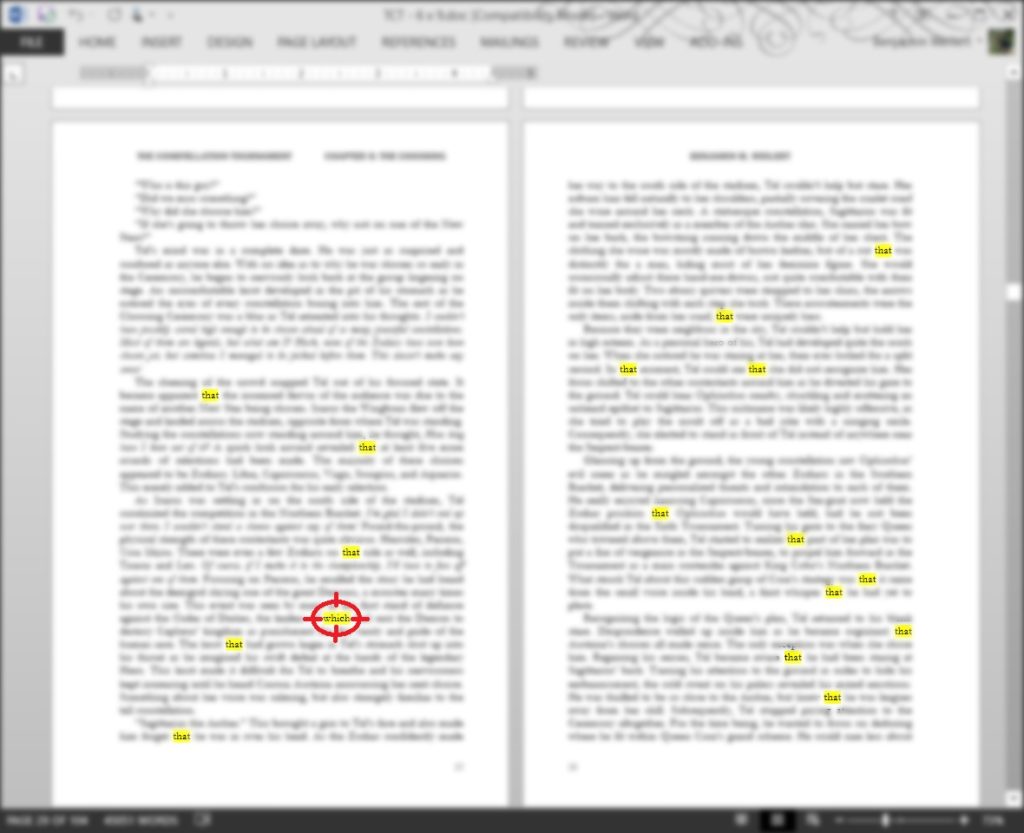 If you’re like me, you’ll find the pages filled with a sickening amount of yellow marks. Most of the time, these marks can be simply removed with the word they’re highlighting. However, I did find these words used as verb modifiers for a large percentage of the highlighted instances. Luckily, this is also an easy fix. For example’s sake, let’s say I have the phrase:

“This expression was replaced by a twinkle that emerged in her bright eyes.”

Just removing the offending word doesn’t work, so I have to modify the verb connected to it. Now the phrase reads:

“This expression was replaced by a twinkle emerging in her bright eyes.”

I admit it’s still a little clunky and needs more polishing, but it’s a start. These instances usually ascribe to the format: noun -> “that” or “which” -> past tense verb. The fix is usually to make the past tense verb into a gerund (an “-ing” verb instead of an “-ed” verb) and go from there.

It might take a lot of work to play Which Hunter, but it’s still a simple tool to make your writing more concise.

What “games” do you play to help edit your writing?