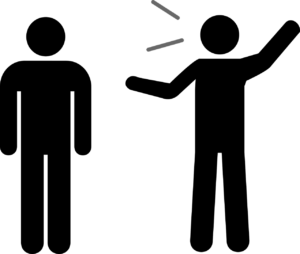 Just like everyone has a bellybutton, we all have opinions. However, if the 2016 election has taught us anything, it’s that most people’s opinions seem to be on extreme ends of the spectrum. I know you can’t please all the people all of the time, but as writers who want to sell books, we should at least try to remain unbiased. Sure, our beliefs will usually leak through into our writing. If we leave it at a subconscious level, this amount of bias isn’t too bad. When a writer tries to take a purposeful stance on something via their fiction, most of the time it falls flat and fails to convince anyone to change their mind. Here are three reasons why writers should try to be neutral in their narrative:

I get it. The world is a mess, and we all want to blame someone for it. In these trying times, it’s easy for writers to mount their soapbox with pen in hand and let everyone know what’s what. Of course, most things in life aren’t black-and-white. There are subtleties that most opinionated writers will omit to prove their point. As a reader, when the writer clearly defines their opinions in their writing, it distracts from the story. We no longer feel immersed in a world. Instead, we feel like the writer is preaching at us with a megaphone.

If the writer is trying to appeal to those who agree with them, then everything’s fine. However, if a work of fiction is to reach a broad audience, there’s a chance someone with differing opinions could pick up the book and immediately disagree with the writer. In fact, having their beliefs attacked may result in the backfire effect. At its best, the person might never finish reading the book. At its worst, the reader may leave a scathing review because the writer was vehemently against the things the reader believes.

At this point, you may be wondering about satire. While most satire can be considered “preachy,” the best forms of satire take opinions and situations to their logical extremes. Most of us will recognize the initial consequences of a particular set of beliefs, but satire takes these consequences and iterates a few more times to show how ridiculous the world could become. Classic pieces of satire like Joseph Heller’s Catch-22 or Kurt Vonnegut’s Cat’s Cradle take something that’s wrong with the world and extrapolate it out to an almost inevitable conclusion. By pulling this thread to its logical end, satire manages to avoid being whiney and instead shines a harsh light on a potentially slippery slope.

Characters are stereotypes instead of archetypes

Many times, the opinions of the writer come through via their characters. Even the narrator, which should be the most neutral character in a book (especially when written in 3rd person) can expose the writer’s biases. The most apparent way characters can reveal the author’s true intentions is if they are stereotypes. While most stereotypes are based at least somewhat on factors that ring true, they are usually used in fiction as an oversimplification. Furthermore, many stereotypes can be hurtful, which again links back to your audience: do you want the people who identify with these stereotypes to enjoy your book?

I think it’s important to distinguish between stereotypes and archetypes here. Archetypes are fine, as they usually define a character and their motivation, even if this particular character has been written in numerous contexts before. Common archetypes like the “hero,” the “villain,” or the “damsel in distress” will act in a certain way because their goals are usually the same across many different works of fiction. The hero wants to save, the villain wants to destroy, and the damsel in distress wants to be rescued. Granted, some of these archetypes can be stereotypes as well, but writers need to make sure they walk that fine line between hateful stereotypes and common themes to help define a character.

In the end, the characters a writer employs in their story should appear real. If they’re just cardboard cutouts and punching bags for the author to express their frustration, then the story won’t be nearly as entertaining. Just like satire takes consequences of actions to their extremes, even characters in a story must have a logical action and reaction to their surroundings. If the characters are stereotypes, what made them into stereotypes? Upbringing? Tragic backstory? External events? When these actions that lead to the consequence of a stereotype are explored, suddenly the character becomes well rounded and less of a stereotype.

Write what you don’t know

Even though the idiom of “write what you know” helps to fill your stories with the realism that experience can provide, when it comes to opinionated writing, it’s actually a handicap. We all want our opinion to be the right one, but if the opposition in this debate is comprised of simpletons, then the reader is only receiving one side of the story. I’m not advocating for writers to write about topics they know nothing about. Instead, I’m suggesting that writers become informed and educated about the opposing opinion so they can present both sides in an equal and unbiased manner.

When an author takes a particular side on a topic, many plot holes can start to appear in the story if they haven’t considered the other side’s arguments. I know they want their opinion to seem correct, but if they’re forcing the plot to meld to their beliefs, cracks start to appear. Worldbuilding can be a challenge in fiction, but the closer it mimics a reality a reader can recognize and relate to, the easier it is for the writer to engage said reader. If anything, forcing an opinion onto a story merely highlights some of the author’s ignorance.

I’ve read a lot of books recently that have obvious opinions on many topics. I just have to roll my eyes at how preachy these narratives are. However, one book stood out because the author managed to create characters with differing opinions and gave them the opportunity to have a civil debate about their beliefs. The Infinet by John Ackers still had moments that felt biased, but he managed to provide rebuttals to these biases via his characters’ beliefs. By the end of the book, nobody had changed their opinion on anything, but it gave me plenty to think about when it came to some of these controversial topics.

When it comes right down to it, there will always be controversial topics. Religion, politics, and money are usually the topics we try to avoid to prevent a confrontation in real life. Some authors will take this as a challenge to create a world where only one side of the equation is present, which will likely alienate many readers. I’m not suggesting we don’t ever write anything about controversial topics. I’m merely suggesting that, just like in real-life, we get all the facts and provide a neutral space to discuss these challenging ideas in a fictional context. After all, letting someone come to their own realization is much more satisfying than shoving that realization down their throat.