Congratulations! Admitting that you want to be a writer is the first step in achieving that goal. “But . . .” I hear you hesitate, “what does being a ‘writer’ even mean?” Plenty of people have their definitions for the term, but in its simplest form, being a writer means that you write. Simple, no? Some of the complexity of the term “writer” comes when people make the transition to “author,” since being an author usually means you’ve published something (be it self-published or traditionally published). I consider myself an author because I have written books and published them. Others might disagree, since the process of being traditionally published is a lot more involved (and complicated). Either way, we’re getting ahead of ourselves a bit. Let’s start on the ground floor: being a writer.

Being a writer simply means that you write.

If all it takes to be a writer is to write something, then you could be a writer just by writing e-mails and texts to your family and friends. One of the subtexts of the title of “writer” implies that you are writing stories. Whether or not they’re fiction or non-fiction, short stories or a series of novels, you’ll want some of the basic elements of a story in your writing. Most of these items are self-explanatory, and it would be hard to write a story without them (especially if you’re just starting out). Characters, settings, and plot are the basic building blocks of any story as they help to answer the “Five W’s . . . and one H.” Think of it as a pyramid, with the “character” at the top answering “who,” the “setting” answering “where and when,” and the “plot” answering “what, why, and how.” If you can answer all six of those fundamental questions, you likely have a premise on your hands. 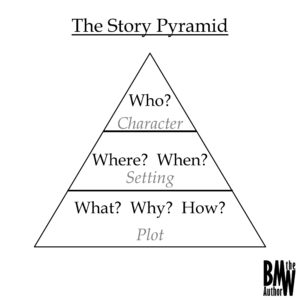 Depending on your answers to the six aforementioned questions, you can easily define what genre you’re writing. Let’s look at a few examples:

Clearly, this is the premise for the sci-fi classic, Ender’s Game. Let’s do another one:

Again, we have a classic archetype for a fantasy with The Lord of the Rings. These are the easier genres to figure out, but even just one answer to one of the six questions could reveal your genre. If your “when” is “the past,” it could be historical fiction. If your “what” is “solving a crime” you could be writing a mystery or thriller. If your “how” is “farts,” you probably have a comedy (albeit probably a low-brow one). You don’t necessarily need all the questions answered to start writing, but the more you can figure out ahead of time, the better. Even though it’s not “writing” per se, the more books you read, the easier it can be to answer these six questions. If you want to be a writer, reading is certainly a necessary part of that.

So, now that you’ve said you want to write, and you have a few of your defining questions answered, you can finally start writing! Some people choose to take some time to develop the answers to the defining questions, planning out their book in more detail before they write it. Others will write by the seat of their pants, making it up as they go along the “stream of consciousness” in their mind. When it comes right down to it, the method you use doesn’t matter, as long as you sit down and write!

It doesn’t matter how you plan your story, as long as you actually write it.

At this point, two enemies of the writer will usually emerge. The first is known as “doubt.” Sure, you’ll start writing your story, and things will be going great, but then you hit a snag. Your character isn’t acting the way you want them to. The setting feels wrong. It’s taking forever to get to the “good stuff” in your plot. Now that little voice starts creeping into your mind and whispers its little lies like, “You’re not good enough,” or “This writing is garbage,” or “Nobody will read this.” In those moments of vulnerability, you need to shout at those feelings of doubt and tell them to “GET OUT!” A first draft is never perfect, but you won’t have a first draft to polish into a great manuscript if you stop writing now. Similarly, our second enemy, the “internal editor” will come along and want to fix things as you’re writing them. This enemy is usually one the advanced writers deal with, but even inexperienced writers can see what’s not working in their writing. While I allow my internal editor to make a few changes to the immediate scene, if I ever let it go back and tweak an earlier part of the story, it stops the momentum of my writing. Editing comes later (and takes longer), so just focus on the writing.

The best way to become a writer is to write, but the best way to continue being a writer is to continue writing. Inertia is a real thing when it comes to writing. A story at rest will remain at rest until an outside force is applied. Similarly, a story in motion will continue in motion. If you have momentum in your writing, it’s easy to keep writing. For me, the struggle has always been finding a large enough chunk of time so that I can allow myself to get into the writing without having to stop it for some other responsibility. It takes a little bit to get warmed up sometimes, but once I’m in the zone, the words fly onto the page. Similarly, if you can develop a writing habit, it makes it easier to find the time for it because you’ve scheduled it into your life. Maybe you have an hour before work each day or a couple of minutes at lunch or a few hours after dinner. Whatever time works for you, if you can write on a daily basis, you’d be surprised how quickly the pages start adding up. Case in point: if you write 1,667 words (about three pages) every day for a month, you’ll have 50,000 words of the first draft of a novel!

Each little bit of writing adds up over time.

Finally, now that you’ve decided to write, and you have a story you want to explore, I would encourage you to find a community of writers to join. Writing can be a solitary endeavor, and I know many people (myself included) who use writing as a form of therapy. That being said, when you’re around other writers, you’ll have other people who can help you get through writer’s blocks, provide suggestions for improving your story, or even just listen to the great sentence you just finished. This is why I strongly encourage anyone who wants to write (especially if they want to write a novel) to participate in National Novel Writing Month (also known as NaNoWriMo). Every November (since 1999), writers from around the world sit down to write at least 50,000 words of the first draft of a novel. Not only is it a concrete goal, but it has a deadline as well: 30 days or bust. Now, not everyone who tries NaNoWriMo manages to reach that 50,000-word goal, but the fact that they commit to writing something helps them to become a writer. After all, you can’t become an author unless you finish writing a story, but you’ll never finish writing your story if you never start writing it.