Last month, I discussed how The Legend of Zelda: Breath of the Wild could teach writers about world-building, travel time, and how to show (and not tell). Even if open-world games like Breath of the Wild can give the player any experience they want, there are still some weaknesses of the genre. It’s difficult to provide direction for a plot that can be experienced at any time and in any order. Older video games didn’t particularly have this problem due to their fairly linear format. Of course, there also wasn’t much in terms of a story either.

While nostalgia can color our experiences with games like Mega Man and Super Mario Bros., one can find their influence on modern gaming in gems like Shovel Knight. With modern development tools, game companies can preserve the nostalgia of these older games while also advancing the “retro” style in exciting ways. What’s perhaps surprising about Shovel Knight is its ability to tell a story linearly but with enough flexibility that the player won’t necessarily get the same experience each time. So, without further ado, let’s explore what writing tips we can glean from: 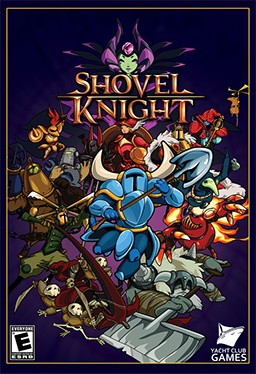 For this week’s game, I’d like to include the first three campaigns of this throw-back. That means I’ll be referencing “Shovel of Hope,” “Plague of Shadows,” and “Specter of Torment.” I’m sure the final portion of this game, “King of Cards” will have similar lessons to show us, it just hasn’t released yet. While I grew up with the video games that inspired this recent release, I’d offer that even those who didn’t have this nostalgia might enjoy playing through this particular (if not peculiar) platformer.

The main thing you’ll notice right from the start with this game is that it excels in Motif and Theme. Each of the Knights of the Order of No Quarter has a specific trait that gives their level a particular look and feel. Sure, it can feel exaggerated at times; but there’s no doubt that a boss character you meet at the end of a graveyard would be similar to the grim reaper. Each setting feels unique to the character who inhabits it, and each of these characters is distinguishable from each other based on these themes and motifs. When you’re designing your characters—especially ones as diverse as the Knights of the Order of No Quarter—make sure you pick something that will make them unique and expand upon that theme into the motif of that’s character’s design and behavior.

One of the benefits of Shovel Knight’s various campaigns is that it allows the player to control different characters. The titular character has a pretty standard “hero’s quest;” but once you are able to play as the enemy, you start to realize they might not be as bad as you first thought. The key here is using the different points of view (POVs) to explore the motive of a character. It can be easy to get in a character’s head using the first person POV to show their reactions to certain stimuli—some of which likely resulted from their backstory and past experiences. This might not entirely excuse the actions of a villain, but it can certainly make them more realistic and relatable.

While some genres like fantasy can lend themselves to a variety of settings like Shovel Knight does, part of the challenge of including diverse characters in writing is to make their inclusion feel natural. Part of this is tied to the previous points of motif and POV. More importantly, Shovel Knight is an interesting game because of the various characters’ diversity. It can get pretty boring going through the same levels over and over again to face the same boss with minor differences added to make them “unique.” These diverse characters can add interest and sub-plot conflicts to a story that might otherwise be a straightforward “save the princess” narrative. In fact, the fact this game chose to make the “princess” an equal partner with the titular character is something that I’d readily declare as #relationshipgoals.

As you can see, even a simple game like Shovel Knight has a lot it can teach writers about characters. Additionally, even though the concept of a knight who wields a shovel seems ridiculous, the game commits to it wholeheartedly and has a believable story and world as a result. If anything, this should inspire you to write that weird mash-up you’ve been thinking about. After all, how ridiculous could it be? Surely, not as absurd as Shovel Knight. And we all see how successful it became.

Have you played Shovel Knight?
What are some pitfalls of writing “video game” characters?
What other games have great characters?