Art inspires art. Sometimes a beautiful painting can give you an idea for a short story. Perhaps a beloved song is a jumping-off point for a novella. Maybe a great movie can get your creative juices flowing for a book of your own. Art can come in many forms, but one form most people don’t readily recognize is that of video games. I’ve already written about how games like Not Tetris describe my idea-collecting process, but recently I’ve played a few games I would consider artistic enough to pull some lessons into my own writing.

Video games have come a long way from the days of Pong and Pac-Man. While these games were kept simple due to technical limitations, today’s video games no longer have these restrictions. I think one of the reasons why video games aren’t considered art is that most art is one-directional. You go to a museum to view paintings. You listen to music on your phone or computer. You read books from one page to the next. Sure, you’re still interacting with the art in some way (sometimes more than others), but the artist can only provide one side of the experience. Video games, however, are intrinsically more interactive and thus need to be more flexible in their art. Anymore, video games are more like interactive movies. Considering how artistic movies can be, then can’t video games be just as artistic?

This month—and for the next few months—I’d like to discuss how video games can teach writers some tricks to help improve their craft. While many of these examples are modern, I’ll focus on one game each month to highlight the aspects that writers can use in their writing. This month, I’ll be covering:

The Legend of Zelda: Breath of the Wild 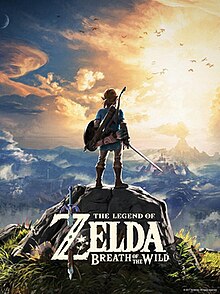 I’ve been a fan of the Zelda series for quite a while. This latest entry is what motivated me to purchase a Nintendo Switch, and it gave me numerous hours of content to absorb. While this was my first foray into the realm of open-world action games, I recognize there are other prime examples in the genre. From Shadow of the Colossus to Skyrim, there are many ways to set up an open world for players to explore. Even though I’ll be specifically talking about Breath of the Wild in this post, if you’ve ever played an open-world game, you can likely glean some of the same writing tips.

Early entries in the Zelda series had a limited amount of ability to convey the complexity of the world they inhabited. This was again a restriction of the hardware at the time. By the time the first 3-D Zelda came out, a lot of that changed. Ocarina of Time set the standard for the series, bringing forth fully fleshed-out races and themes that have continued through the series to this day. If you’re writing fantasy, look no further than Breath of the Wild to see the latest example of a world filled with different races of allies and monsters. From the rock-like Gorons, fish-like Zoras, and bird-like Rito to more human-like Gerudo and Hylians, the variety in the characters is based in part on the geography and geology of the world they inhabit.

When you’re building your own world in your writing, what are some things to consider? Are there rivalries between races? Cultural limitations? Can some races only survive in the immediate area around their home? What about geography? Breath of the Wild features volcanoes, deserts, lakes, beaches, mountains, plains, and everything between. How would you describe these places? While “magic” isn’t necessarily a huge part of Breath of the Wild, it is present in limited forms. What rules does this magic have? Are there limitations? Extreme or destructive cases? Remember, the more depth and detail you can figure out for the world you’re writing, the more realistic it will seem for your reader. Just don’t get distracted with too many details, or you might derail your story.

Breath of the Wild is by far the most extensive map in the Zelda series to date. Like I mentioned above, there’s plenty of geographic features, but it can take a while to travel from one location to another. While one way around this is the quick travel system that can warp Link from one place to another, your story might not have that luxury (as an example, The Fluxion Trilogy uses a series of doors and keys to accomplish this quick travel technique). In open-world games like this, it can take actual time to traverse the distance between towns or other points of interest. While you’re playing, start to consider how long it takes to travel by walking, running, on horseback, on the glider, or on an ancient motorcycle. Granted, the world of Breath of the Wild is scaled down a bit from the real world, but figuring out how long travel takes is essential to give the world you’re creating some heft and size.

Similarly, with a world as big as Hyrule is in Breath of the Wild, there are plenty of different climates. When your characters travel to a new place, do you know what equipment they need? How often have I quick-traveled to a snowy mountain from a scorching volcano and had to change Link’s clothes to handle the new climate? How does this climate change during the day as compared to the night? For instance, in the hot desert, I need to be able to handle the heat during the day, but when night comes, I need to switch over to cold-weather gear. And it’s not just climates that necessitate adequate accouterments. If Link is climbing a mountain, walking in the snow, or running in sand, I equip the right gear to make that task easier. What do your characters need to overcome the challenges of their world? If they’re not adequately equipped, what problems arise?

One of the limitations of the open-world format is the ability to force a linear storyline. As a writer, one of the only ways to imitate this would be via a “choose your own adventure” story. However, this limitation in a video game puts more of an onus on the ability of the game developers to “show and not tell.” In fact, most games that have excessive handholding are seen as frustrating since the player is always reminded what to do. In a game like Breath of the Wild, the exploration of the world helps tell the story, even if it’s indirectly. Instead of saying that Hyrule Castle is taken over by Calamity Ganon, it’s constantly shown off in the distance, surrounded by a swirl of dark purple evil. Plenty of monuments and ruins show what the world used to be, leaving the reason why to the player’s imagination.

Because there’s a limitation to storytelling in an open-world game, Breath of the Wild resorted to flashbacks to deliver key plot points to the player. While this technique is generally frowned upon in writing, it’s important to note that flashbacks can work if used infrequently and only for critical pieces of information. Sometimes, you can “show” a lot about a character or setting, but a little “tell” can go a long way if there’s any ambiguity in the string of hints you’ve laid down for the reader.

While Breath of the Wild isn’t necessarily a perfect game, it does provide a unique experience that I haven’t encountered before. I could dive deeper into the character progression, physics, weather, lore, and other elements of this game that can help improve writing skills, but these three topics cover the significant points for right now. Next month, I’ll explore how video games can improve writing from different Points of View (POV), well-rounded characters, and thematic motifs.

Have you played Breath of the Wild?
How about other open-world games?
What writing tips could you glean from them?