Anyone who has met me and talked to me for any considerable amount of time will know that I like movies. This love of cinema started in high school but blossomed in college. While I was in college, I decided to watch through the American Film Institute (AFI) top 100 movie lists. I found many classics had become my favorites in this process. After graduating, I then set out and watched all the movies that had won the Oscar for Best Picture. This was slightly less inspiring, as there were some obvious snubs over the Academy Awards’ almost 100-year history. When I moved back to Colorado, I picked up a copy of 1001 Movies You Must See Before You Die when a nearby Borders Bookstore was going out of business. This was an eclectic list, but it gave me the best quote when it comes to listing out the “best” movies. I’m paraphrasing somewhat, but it basically said, “Sometimes you want a steak, and sometimes you want a greasy hamburger.”

Over the years, I’ve come across a variety of lists that tout the definitive “best movies of all time.” Most had limitations. The Oscars only selected one to receive the top prize each year. AFI focused almost exclusively on cinema from the United States. The 1001 book found itself limited by this arbitrary number of movies. Still, the 1001 book is the closest I’ve come to a definitive list of the best films. In fact, I’ve found a wiki online that lets me see which movies were added in each successive iteration of the book (mostly so I won’t have to rebuy it, year after year). However, critics—not necessarily the average Joe who likes to watch movies—create most of these lists.

Plenty of critics will praise artsy movies that don’t make much sense, just like they’ll smear movies that are entertaining despite their lack of artistic merit. I have seen a bit of the distinction between the critics and the movie-going public over the years. Consequently, while critics have lots of clout and the ability to arrange these hierarchical lists of movies, I have had some trouble trying to find the “everyman” best movie list. Or, at least I’ve had trouble finding one that spans any significant amount of time.

That’s where the internet comes into play.

I’ve always loved finding sites on the internet that utilize the connectivity of people to the greatest effect. Websites like 14ers.com and GasBuddy.com are great resources because they pull their latest information from the people on the ground who are experiencing the latest conditions in the real world (be it climbing conditions or gas prices). And while an internet community will always have some inherent biases based on the core group who would participate in such a community, the aggregate opinion of individuals starts to smooth out some of the outliers when it comes to accurate information.

Enter the Internet Movie Database (IMDb). Somewhat similar to Wikipedia in the sense that the users provide and update information, IMDb is a great place to aggregate reviews of movies from absolutely anyone. Granted, some films will be divisive enough that you’ll start to see a split between people who love it and people who hate it. Still, the main idea is that enough people will enjoy a movie enough to write about it, thus creating an average score that speaks to the film’s quality. As far back as 1996, the IMDb has been able to use these reviews to draw a line in the sand that defines the 250 best movies.

The trick with this list (aside from a somewhat arbitrary 250-item cutoff) is that it only captures the 250 best films for that year. The next year, some great movies are bound to come out that might push older movies or movies that have lost their appeal off the list. Additionally, each list doesn’t help in showing the overall list of best films averaged over time. Trying to remedy this situation, I decided to collect all the IMDb top 250 lists created so far (from 1996 to 2019) and get a definitive answer.

In compiling these lists, I realized I created a list that shows a movie’s evolving popularity. Consequently, I found a few interesting trends. You can see these trends yourself by following this link to the above spreadsheet on Google Documents.

As of the end of 2019, there are just over 700 movies on this “complete” IMDb list. I know there is some vague formula they use to determine these lists, and there is a bit of a bias that ends up emerging when you average the rankings over 23 years. The top movies fit into the category of being popular with white males ages 18-35 (which I’ll admit, I fall into this demographic). Does this make them bad movies? Not at all. Instead, it shows the inherent bias that Hollywood has been slammed with in the last several years. If it’s popular and sells, they’ll keep creating it. That seems to me why the bias remains.

An interesting note, but of these 700+ movies, I’ve included 200 in my book, Cinema Connections: a never-ending “6 Degrees of Kevin Bacon.” If you’d like to see what 200 movies didn’t make the IMDb list, you can find more information on where to purchase it by following this link. 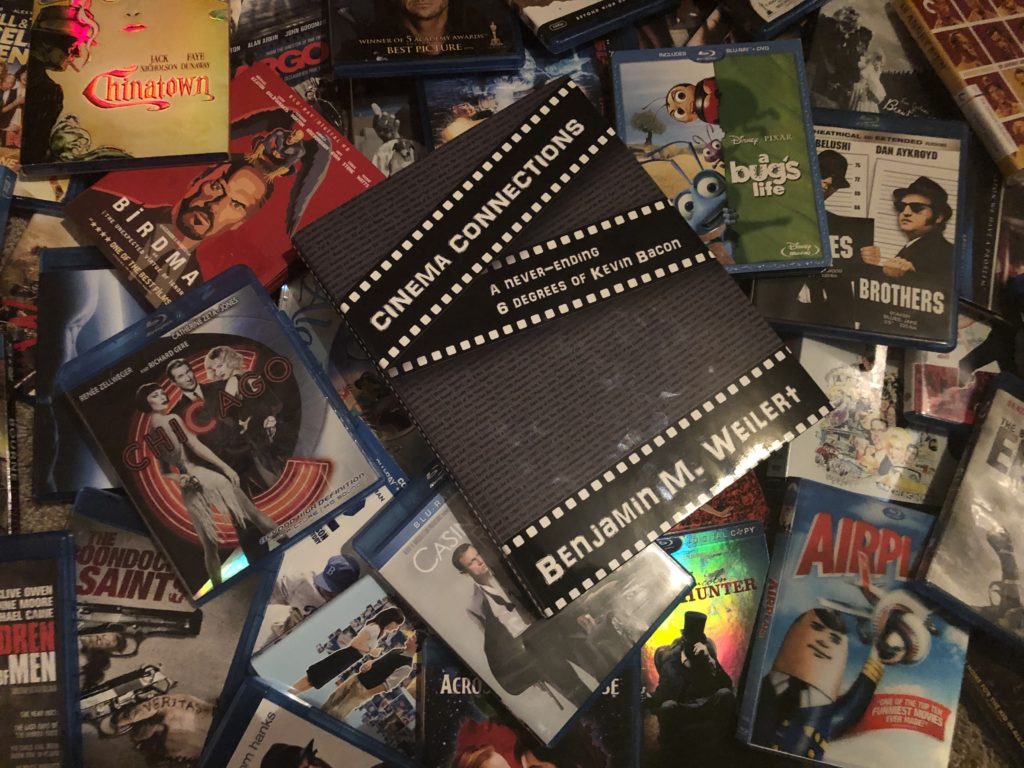