If 2020 has taught me anything, it’s how to be flexible. It’s quite difficult to predict what will happen in a year, let alone one with such a massive global event like COVID-19. Fortunately, writing is a solitary activity, so writing new stories isn’t terribly difficult when I’m forced to stay home. Unfortunately, this pandemic has been such a historical moment that it’s difficult to ignore it in anything written in the present day.

While I had plans to write a rather dramatic story set in the real world and in present times, I’m now considering moving it out a few years to gain some distance from COVID. Hopefully, this whole mess will be done by the time I start writing this book, and I’ll have a bit of hindsight to help mold the characters and plot. So far, I’ve already gained a few key points that I want to integrate into the story that will certainly be familiar to anyone who has lived through this pandemic.

When plans change, how do you react?

The problem with pushing out this story is what to do in the meantime? I was planning on writing this book next year, but now that it’s being pushed out, I need something to fill the gap.

Fortunately, this is hardly the only project I’m currently planning. In fact, I have another story set in a fantasy world that has nothing to do with our current reality. I’m quite energized to write this fantasy book and almost can’t wait to commit these words to paper. Since the inspiration is so fresh and vivid for this different story, I’m not even sure if it will be a single book; it might even be a series, which would definitely give enough time between COVID and the start of my “real world” story for things to settle down.

Of course, it’s easy to pull from a backlog of ideas and move around my scheduled writing a bit when nothing has, in fact, been written yet. It’s a little more difficult to shift course when the book has been written and is about ready to publish.

Don’t put all your eggs in one basket.

Earlier this year, I was well on my way to publishing Buried Colony. I was pulling out all the stops for this one. I had hired a professional editor, I was working on arranging an audiobook version, and I had enough time to give out a few advanced reader copies. The pandemic had allowed me to push out my release date into September, which provided me with more opportunities to promote Buried Colony than I had ever utilized before.

Then I got some startling feedback.

Despite having run this story through multiple beta readers and my editor, one of my advanced readers provided some notes that were far from flattering. After getting over the sinking feeling in my stomach, I did the right thing and pulled back the release of Buried Colony. One of the preparation steps for this story I had not considered was getting a sensitivity reader to go over it. While this reader basically acted as that role for me, I knew that this book would need some major re-working to be more acceptable to the general public. 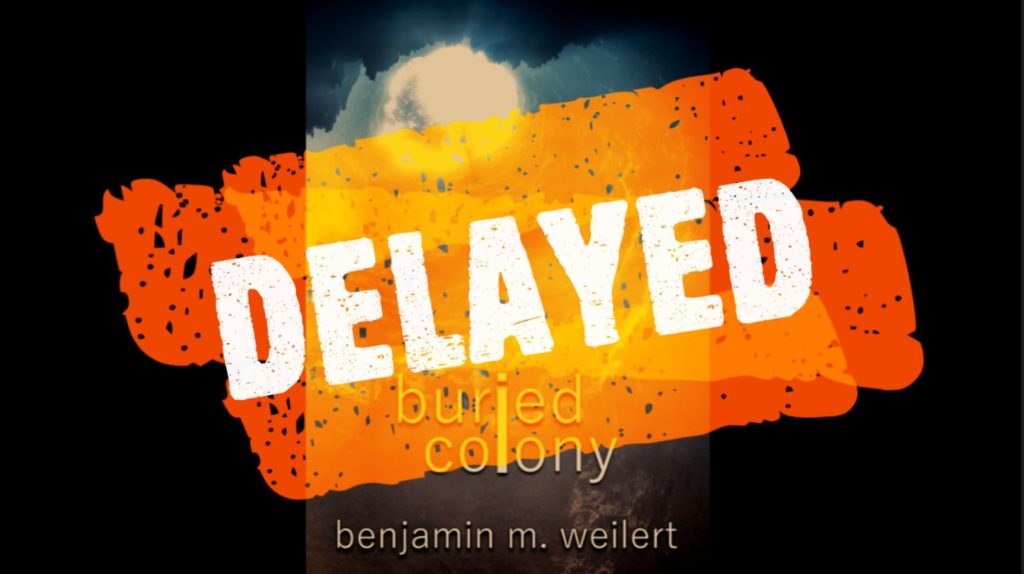 In 2016/2017, I set a goal for myself to publish a book each year under my own name. While I had released Welcome to the Alpacalypse this year with The Midnight Writers, I still wanted something that was solely mine to publish. With not nearly enough time to fix Buried Colony before the end of the year, I needed to pivot to another project to accomplish this goal for 2020.

The more control you have, the easier it is to pivot.

In both instances this year, I was able to change plans and pivot to other projects quickly. I was able to do this because I work on multiple projects at once. The worst thing for an artist (especially a writer) to hear from their fans is, “I like what you created, but what have you done for me lately?” Sure, some authors can hang their laurels on a Magnum Opus, as it were. However, as a reader, I love reading the next book by my favorite author, no matter if it’s in the same genre or not.

Of course, this can get out of hand as well. A few months ago, I was planning out the projects I want to work on in 2021, and I had to step back and realize I was stuffing my schedule too full. I had managed to schedule three book releases next year, along with writing, editing, re-working, audiobook recording, marketing, and various other tasks involved with eventually releasing a book. Sure, some of the drafts I plan to write next year won’t be published next year, but they have to start somewhere—and they still take time to write. By taking the time to write out what I wanted to accomplish, I was able to lighten my creative load a little while still having enough backlog to pivot should another crisis like Buried Colony come along.

How many projects do you work on at once?
Do you have a goal for each year?
What happens if you can’t meet it?